History of the Locating "Dragon"

THE STORY OF THE LOCATING “DRAGON” – As told by former DSM WO2 Ron (Chalky) V Royal. 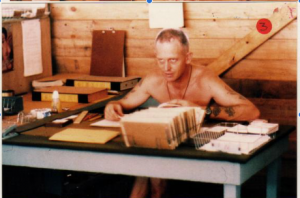 As an RAA Battery Detachment stationed at Nui Dat, South Vietnam, we had no home. Unlike the Gun Batteries who were all together in their positions, the detachment was spread all over the NUI DAT area as LP, Radar, Svy and Arty Int. The detachment 131 HQ consisted of a tent. OC Captain Warwick Hamilton said we should build a home, so the detachment HQ went to work with help at times from parties from Radar, Svy, LP, etc. On completion we had an Orderly Room, ‘Q’ Store and a Rec. Hut, with the detachment sign surveyed in to tell all who we were.

The lane in front of the sign we called “Locators Lane”. At this time, September-October 1967, the flagpole went up. Some new Australian National flags arrived from “Down Under” and the ‘Q’ store got one, so up it went, but alas we were told to take it down before the week was up, as only Regt. HQ could fly the National Flag, even though we were an independent unit. The detachment plaque then came into being. Having no guns we were going to be different, so Capt. Hamilton and I got to work. We wanted something to relate to being in the Orient, not gaudy, but with a meaning. The good Captain had a U.S. envelope, which portrayed a dragon in flight, not dissimilar to a map of Vietnam. The subsequent basis for the adoption of that particular type of dragon will come at the end of this account. Survey Section had a fine artist , Gnr. Ron Webb, in their midst and he drew a dragon for us. So began the build-up of the plaque, Something else was needed, so I thought of the atom symbol round a black background, indicating that Locators worked day and night, and having a Detachment Center representing all sections rotating around as their work and duties demanded them to be at Fire Support Bases and in our area at all times. But they now had a home to come to, to get their mail, the latest news, R & C, R & R, postings home, and who would be their replacement. The Recreation Hut [later named the “Menz Club”] had its big opening for us, as we were host to a Concert Party in October 1967 and rotating shifts came in to welcome the Party with a Bty BBQ. At long last, we knew we had a home. The design of the plaques met with a good response, and quite a number were ordered so that each member could have one. The name of the Unit was included on each plaque, -l ATF Det 131 Div Loc Bty RAA, symbolizing it’s good work in South Vietnam from 1966 to 1971, the “eyes and ears” of the Task Force.

THE  DRAGON.
The Dragon is the emblem of the Emperor and there are two forms of this fabulous monster, that of the sea, called “LI” and of the sky, called “LUNG”. The Dragon “LUNG” has a head like a camel, eyes like a hare, horns of a deer and the ears of a cow, it’s body covered with fish scales and the claws are like those of a hawk. At each side of the mouth are whiskers, and in the head is sometimes seen as a pearl. The Orientals believed that this animal was capable of breathing out fire and water, and that its voice was like the jingling of metal fans. Note: only just over half of the “Dragon Story” was known at the time of the making of the Plaque.