With the advancement artillery, and it’s ability to dominate the battlefield, the need to locate and destroy the enemies guns became urgent. This led to the rapid development  of  Locating Artillery. From it’s very basic beginnings in WW1, rapid advances in technology have lead to today’s modern Locating Artillery which has demonstrated it’s effectiveness most recently during the Ukraine/Russian War.

Since the invention of gunpowder, and its use in warfare, the cannon (and later the gun) became the dominant feature on the battlefield, mainly in the direct fire role. Under the leadership of Napoleon Bonaparte, the role of artillery was used with deadly effect during his many campaigns.

God fights on the side with the best artillery… Napoleon

Prior to WW1 the locating method to find enemy artillery was by the visual sighting of the guns as they rolled along with the infantry. During WW1 there were major improvements in artillery guns capabilities, particularly with increased range. In the first months of the war there were occasional direct fire engagements but it quickly became obvious that such exposure of the artillery was suicidal. The guns, now because of their indirect fire capabilities, were moved back from the front lines and new methods were needed to find them. So aerial observation was used, firstly from balloons then by aircraft.

To counter detection, camouflage was used and night firing plans were developed but these precautions did not alter Artillery’s primary mission of supporting the infantry at all times. Now Artillery was dispersed over large areas behind the front lines, and with co-ordination, their combined firepower could be concentrated on any target within their range. It was now obvious to all armies on the Western Front that for their infantry to survive, enemy guns had to destroyed but first these guns had to be located!

The problem was not simple, especially under the terrible conditions on the Western Front. However direct visual observation was only partly effective and aerial photography was slow and cumbersome. The need for accurate and timely targeting information was urgently needed so the first elements of Locating Artillery were developed. By late 1917, the employment of sound and flash ranging troops combined with Counter Battery Staffs at Corps Headquarters had become widespread across the Allied armies. In particular, successes earlier in the year for the British and Canadian Armies resulted in establishing a very professional Counter Battery Staff in the two ANZAC Corps Headquarters. After a successful attack by I ANZAC Corps at Broodseinde, where the Counter Battery Staff distinguished themselves by countering a German barrage and neutralizing the German guns, the British commander decided to exploit success by ordering II ANZAC Corps to continue the attack towards the town of Passchendaele.
For the first time, Counter Battery Fire was effectively integrated into the plan of attack with the result that the German Artillery was unable to effectively engage the advancing Australian and New Zealand troops. The attack commenced at 0600 hrs, and largely due to the inability of the Germans to mass fire, the Australians and New Zealanders attained their objectives by 1115 hrs that same morning.

By World War II the use of massed guns had lessened, with more emphasis on the use of howitzers (high angle guns) and mortars.These types of weapons were, in general, far easier to move and far easier to hide. They were ideal weapons for mountainous or jungle terrain, so new methods of detection were needed to combat this new threat. At the time, scientists were developing radar and short based Sound Ranging equipment which had the potential to solve the locating problems.

In 1966 the Australian government committed troops to the Vietnam War and this included a Detachment of 131 Div Loc Bty Locators. Initially it was a mortar locating radar troop, a survey section and an administrative headquarters and latter a sound ranging troop and unattended ground sensor section. This small Unit, of never more than 100 Locators, a mix of ARA and National Service personnel, worked very effectively in small independent teams, which has become the trademark of a ‘Locator’. Meanwhile, the parent Battery remained at Holsworthy, under the command of 19th Composite Regiment and subsequently 8th Medium Regiment.

In 1974 131 Div Loc Bty moved away from the Second World War wooden huts at the Kokoda Lines into new brick accommodation in Finchhafen Lines, Holsworthy. The Battery remained under command for local administration of the newly joined 8/12th Medium Regiment until granted independent status in 1977.

In 1981 the Battery moved to Brisbane, to be collocated with the Headquarters of the 1st Division at Enoggera, where newly constructed brick accommodation had been purpose built.

In 1987, in conjunction with the disbandment of 132nd and 133rd CMF Divisional Locating Batteries, 131 Battery again became integrated with the inclusion of the Army Reserve.

The trial was completed and the RISTA Regt was subsequently disbanded on 30 June 1997, whereupon the 131st Locating Battery was formed. Coinciding with the completion of the RISTA trial, 131 Loc Bty was assigned the force level surveillance capability from 1 Int Coy, in addition to its existing locating role.

In September 1999, 19 members of the Battery deployed to East Timor as part of the International Force in East Timor (INTERFET). The deployment involved personnel at HQ INTERFET, undertaking Targeting duties at DILI Command (a NZ HQ) and in Civil Military Liaison duties while a 15 man Surveillance Section, under operational control of 3 RAR, provided surveillance in the border region between East and West Timor including operations in the Oecussi enclave.

The Battery continued to deploy surveillance sections as part of an Australian Battalion Group, to 6 RAR (Mar 00), 1 RAR (Oct 00), 4 RAR (Cdo) (Apr 01) and 2 RAR (Oct 01), all part of Australia’s contribution to the operation of the United Nations Transitional Authority East Timor (UNTAET). 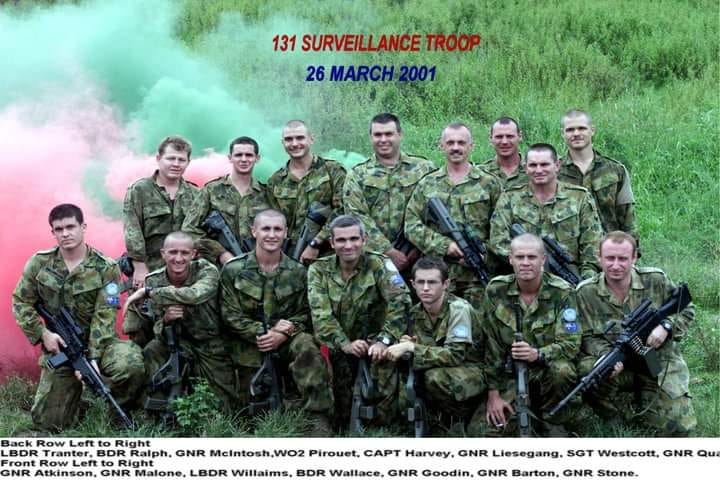 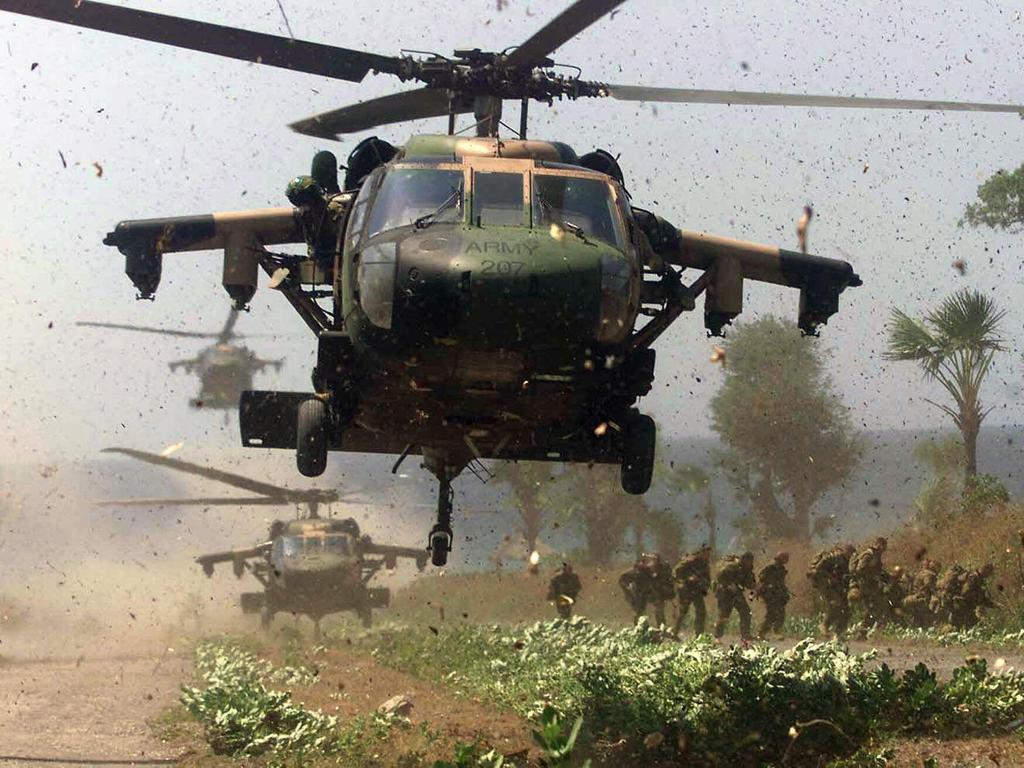 The outcomes of the RISTA trial and the deployment of surveillance elements to East Timor from the Battery, initiated a revision in its Concept of Operations (CONOPS). The unit was re-configured and balanced to meet a wider range of Surveillance and Target Acquisition (STA) tasks across all levels of command. As such the unit underwent a change to its title – 131 Surveillance and Target Acquisition Battery- during its 50th birthday celebrations on the 8th of June 2002.

In July 2003, five members of the Battery deployed as UAV Detachment operations staff as part of the Regional Assistance Mission to the Solomon Islands (RAMSI) on OP ANODE. The Battery Commander commanded the Detachment which consisted of 131 STA Bty personnel, an AAvn LO, DSTO representatives and contractors from Aerosonde who provided and operated the UAV. 22 missions were flown in support of RAMSI police and ADF operations, collecting 3005 still images and 15.6 hours of video on key areas of interest.

In Iraq, the Regiment provided support to the Battle Groups in Southern Iraq commencing with a Weapon Locating Section with the Al Muthanna Task Group 2 in 2005 and finishing with a STA Bty in support of Overwatch Battle Group (West) 4 in 2009. Starting with a nine-man section employing the AN/TPQ-36 Weapon Locating Radar, 20 Regiment’s involvement grew to include a Skylark Miniature Uncrewed Aerial Vehicle Section, a ScanEagle Tactical Uncrewed Aerial Vehicle Troop and a Bty HQ. In the end the STA Bty numbered 30 soldiers and eight contractors.
Over the years, 20th Regiment locators conducted over 200 hostile weapon locations, conducted over 400 Skylark missions and over 10,000 hours of ScanEagle operations. At one stage, the STA Bty also maintained a small team of ScanEagle operators in Basra supporting the British. At the time, Basra was one of the most dangerous places on the planet.
The STA Bty also became renowned in the theatre as one of the very few coalition units conducting traditional artillery intelligence which resulted in products that were used by agencies in Iraq, Australia and the United States. Approximately 150 soldiers of the Regiment served in Iraq, many of whom later also served in Afghanistan. In total, two Radar Sections and four STA Btys were deployed.

In 2007, the Regiment deployed a Skylark UAV detachment to support operations in East Timor.  The detachment provided critical UAS support to the task force in Dili for a three month period and then returned to Australia.  Through its service life in 20th STA Regt, the Skylark system amassed a total of 1500 hours.  As each flight was a maximum of one hour in duration, over 1500 flights were conducted making the Regiment one of the most successful Skylark operators in the world

The Regiment provided Unmanned Aerial System (UAS) in support of OP SLIPPER in Afghanistan over the period 2007 – 2013. It operated the ScanEagle UAS from 2007, deploying a total of nine batteries over the period. Including the deployments to Iraq, ScanEagle amassed 45,000 hours of operational flying.  This UAS was replaced by the Shadow 200 UAS from Mar 2012.  Three Shadow batteries deployed to Tarin Kot over the period until Nov 2013, conducting 10,000 hours of operational flying.  In Nov 2013, the Regiment finally returned from operations and was consolidated in the Enoggera garrison for the first time in it’s history.

In 2014 the Regiment began providing a UAS battery in support of the “Ready” Combat Brigade, and for the first time, the Regiment began  concentrating on refining it’s UAS capability and improving the training of soldiers and officers.

Through the next few years, the Regiment concentrated on conventional warfighting at the Brigade level, providing valuable ISR by employing the Shadow 200 UAS.  Also this allowed the Regiment to concentrate on building depth within its institutions and workforce.

In 2016, the Regiment provided UAS and ISR support to the Division-level Joint Task Force and returned to operating small UAS.  In 2018, for the first time, the Regiment deployed the entire unit into the field to support HQ 1st Division during EX HAMEL 18.  Later 132 Bty was deployed to Papua New Guinea to support OP APEC ASSIST, the first time the Regiment had deployed a TUAS capability smaller than a Battery. This demonstrated the successful deployment of well trained independent small units, similar to their predecessors in Vietnam.

The Regiment also established a small UAS Troop to support  of SOCOMD units and 2 RAR’s amphibious capability.  These experiences solidified 20th Regiment’s position as the Army’s UAS experts.  Later that year, the SUAS Troop supported the Special Operations Task Group in Iraq. As well, the Regiment deployed a number of mobile training teams to assist the PNGDF and Philippines Air Force.

In 2019, the Regiment continued planning for operations outside Military Restricted Airspace in preparation for Project LAND 129 Phase 3 with the replacement of Shadow 200 by INSITU Pacific’s Integrator.

On 09th October 2019  the Regiment changed its name to 20th Regiment RAA to align with the naming convention within the Royal Australian Artillery.

The Regiment continues to grow and improve, maintaining its motto “Seek to Strike”.